You are here: Home / Travel / 11 Best Things to Do In Theodore Roosevelt National Park (Medora)

Below, we share the our 11 favorite things to do in Theodore Roosevelt National Park, as well as give some helpful camping tips for your stay!

I also want to give you some fun trivia on why Theodore Roosevelt National Park is named after our 26th President. 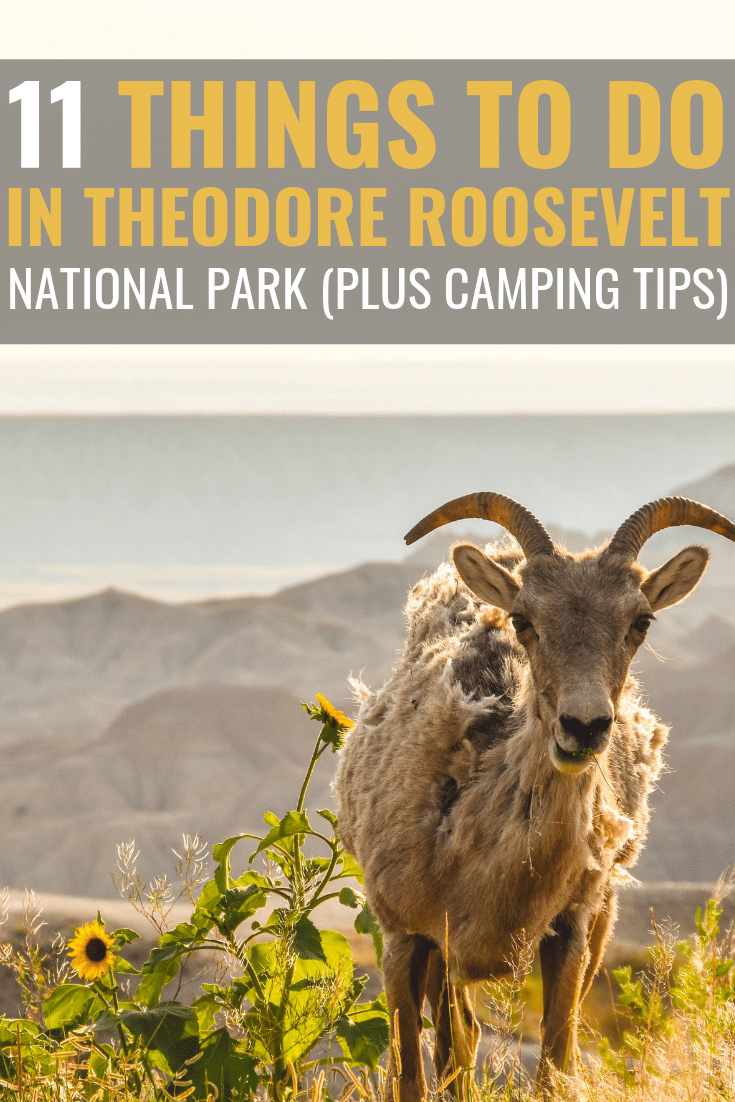 Quick Navigation
A Brief History Lesson...
11 Things to Do In Theodore Roosevelt National Park
1. Walk Inside Teddy Roosevelt's Cabin
2. Take a Drive On the Enchanted Highway
3. Head to the Burning Hills Amphitheater
4. Head to the Pioneer Trails Regional Museum
5. Head to the North Dakota Cowboy Hall of Fame
6. Visit the Elkhorn Ranch
7. Catch the Sunset On Buck Hill
8. Go to the Sacajawea Trading Post
9. Visit Prairie Fire Pottery
10. Go Fishing on the Little Missouri River
11. Head to Western Edge Books
Planning Your Trip to Medora
Best Time of the Year to Visit Medora
Where to Stay In Theodore Roosevelt National Park

Note: Some of the links in this article are affiliate links. This doesn't cost you any more than normal. Read our disclaimer for more info.

Wondering where to stay in Teddy's National Park? Get $50 off an RV rental!

Do you know why Theodore Roosevelt National Park is named after our 26th President?

It's a beautiful story, but has a lot of painful moments in it, too.

Teddy Roosevelt originally went to North Dakota in 1883 to hunt bison. After a successful hunting trip, he traveled back to New York (where he was born and raised).

He received a telegram that his first child was born (hooray!) and then, just a short time after, another telegram informing him that both his mother and his wife were sick.

His mother passed from Typhoid fever and, shortly after, his wife passed from kidney disease.

Roosevelt then wrote an "X" in his personal journal with the words "The light has gone out of my life".

If you've never experienced loss, it's one of the toughest things you've yet to encounter. I cannot imagine what Teddy was feeling during this time, losing both his mother and his wife.

He traveled back to North Dakota and thought of living out his days as a cattleman. 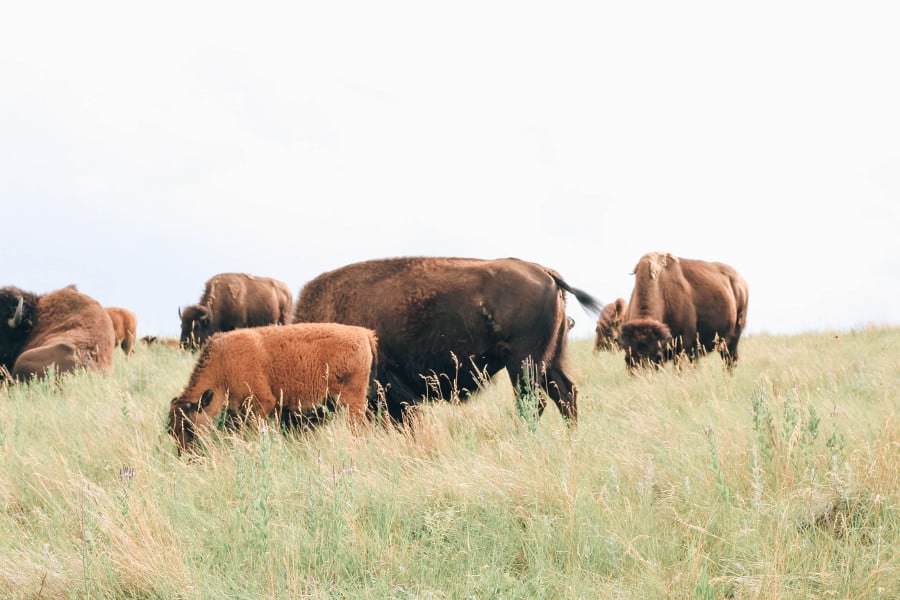 His first ranch (Maltese Cross Ranch) was too close to the town for him, so he purchased another (named Elkhorn) which was 35 miles away.

Teddy brought two of his close friends down from Maine (Bill and Wilmot) to help him manage his ranch.

Though, ranching isn't the best in the Badlands. After some time, he wrote to his sister that he planned on getting out of the ranching business, and sold his property to his two friends from Maine.

He passed in 1919, but his memory will live on forever (both through his stories and through the National Park). The United States Fish and Wildlife Service claimed the park in 1946 and named it after Teddy.

11 Things to Do In Theodore Roosevelt National Park

So, what should you do during your stay in the Badlands?

I've compiled a list of 11 things I think you should do - but honestly, this is just what I recommend and there are so many awesome things to experience during your stay in the park! 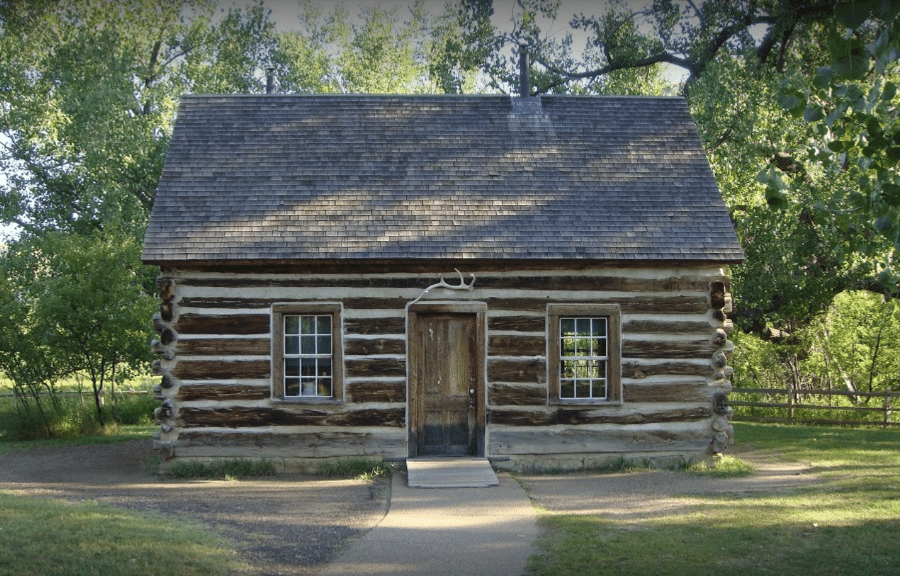 Maltese Cross Cabin belonged to Theodore Roosevelt before he became the 26th president.

I truly believe you shouldn't visit Theodore Roosevelt National Park unless you plan on diving into the rich history there (and what better way to do that than by walking into Teddy's old cabin).

2. Take a Drive On the Enchanted Highway

The Enchanted Highway is a self-guided 30-mile driving tour located on Route 21.

You'll see giant metal sculptures that were designed by a local artist, included a 51-foot sculpture of Theodore Roosevelt himself! The other sculptures are incredible too, but you'll have to see them for yourself to find out what they are!

3. Head to the Burning Hills Amphitheater 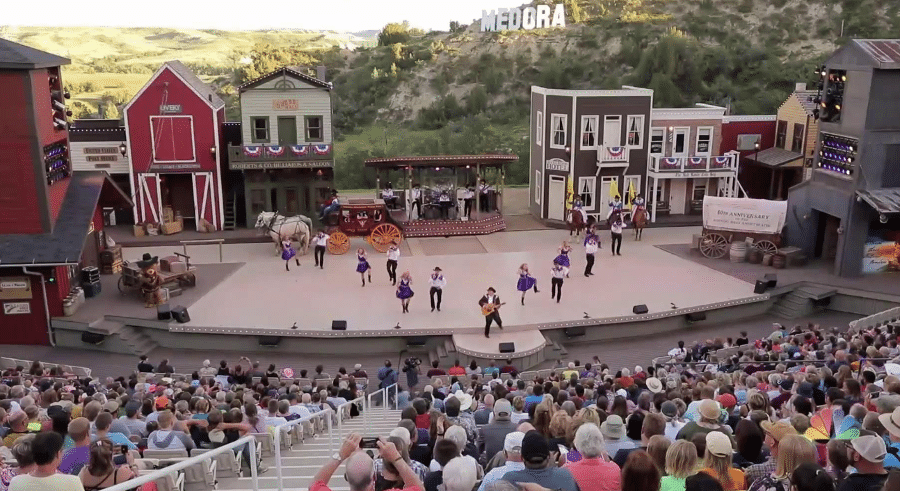 Located 1-mile west of Medora, the Burning Hills Amphitheater is known as one of the most beloved performing arts space.

If you've ever been to a concert or a play before, you've probably tried to get front row seats. While they're awesome seats to have, I'd try to get the middle or upper level seats at the Burning Hills Amphitheater (you'll get a beautiful panoramic view of the badlands that way).

You're able to join the museum staff for local archaeological digs in summer!​

Or, if that isn't your style, simply walk through the fossil exhibit and lab while you're there!

5. Head to the North Dakota Cowboy Hall of Fame 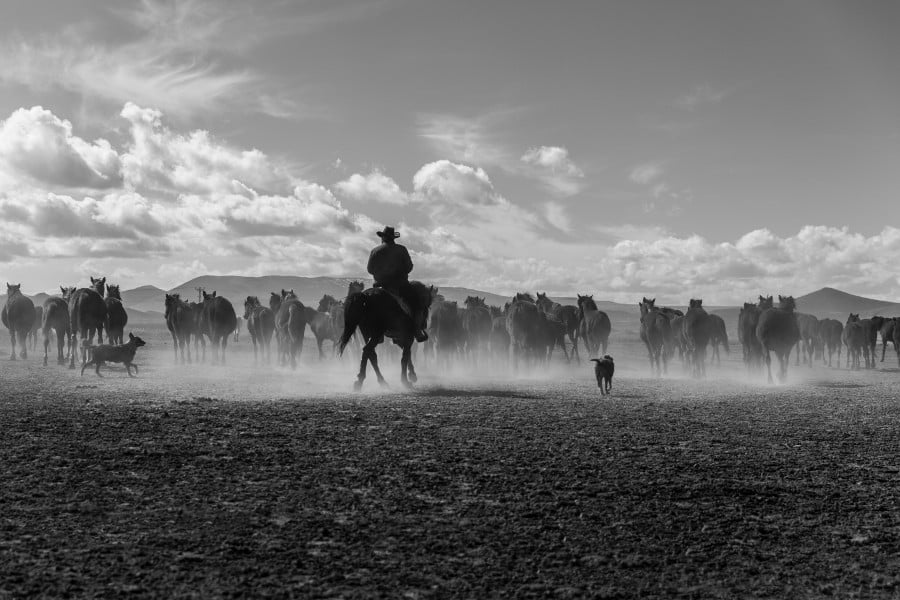 The North Dakota Cowboy Hall of Fame is huge!

It features six galleries (with rotating exhibits), hosts special events, and is dedicated to the horse culture of the plains.

It's a great place for both children and adults!

If you want to visit Theodore Roosevelt National Park to learn more about our 26th president, I'd definitely recommend visiting the Elkhorn Ranch (where he had cattle on the open range).

There aren't any buildings on the property anymore, but the bricks in the ground show off where the original structures were.

7. Catch the Sunset On Buck Hill 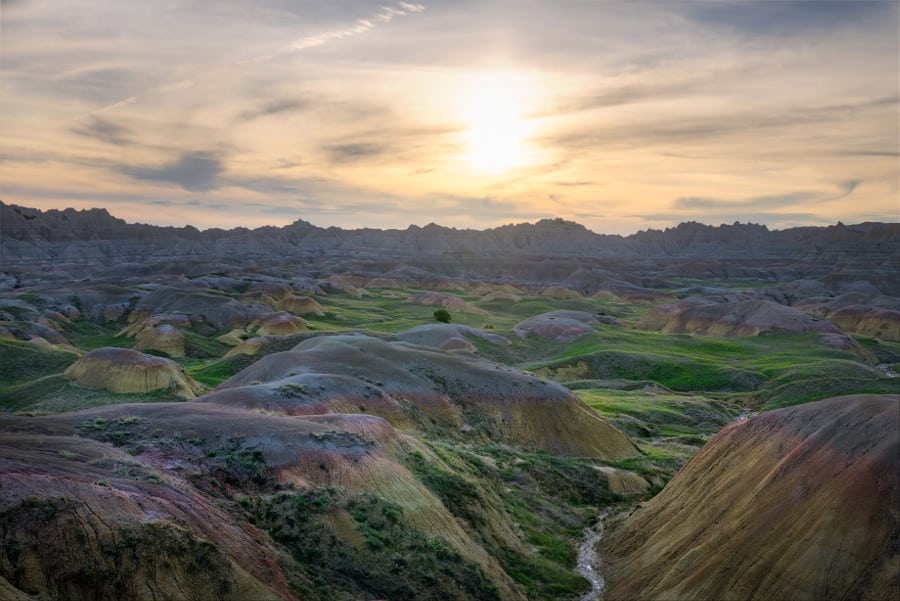 This 2,855 foot peak is one of the highest places you can get while in the National Park.

It provides a beautiful 360-view of the badlands and is known to be the place to go while chasing the sunset.

You're sure to find a good souvenir while you're there! 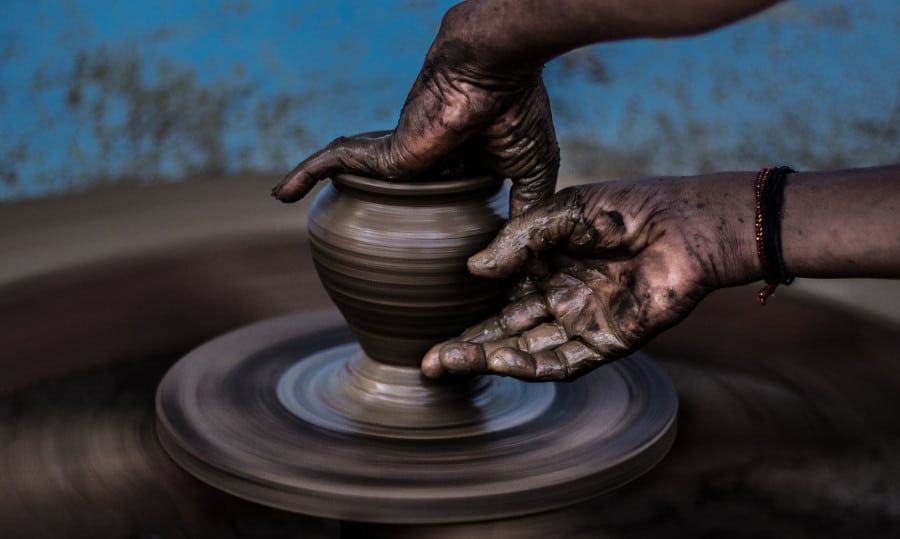 They make all kinds of awesome things - terra-cotta tiles, stoneware pottery, and more!

Catfish, northern pikes, goldeyes, and more are waiting to be caught on the Little Missouri River! 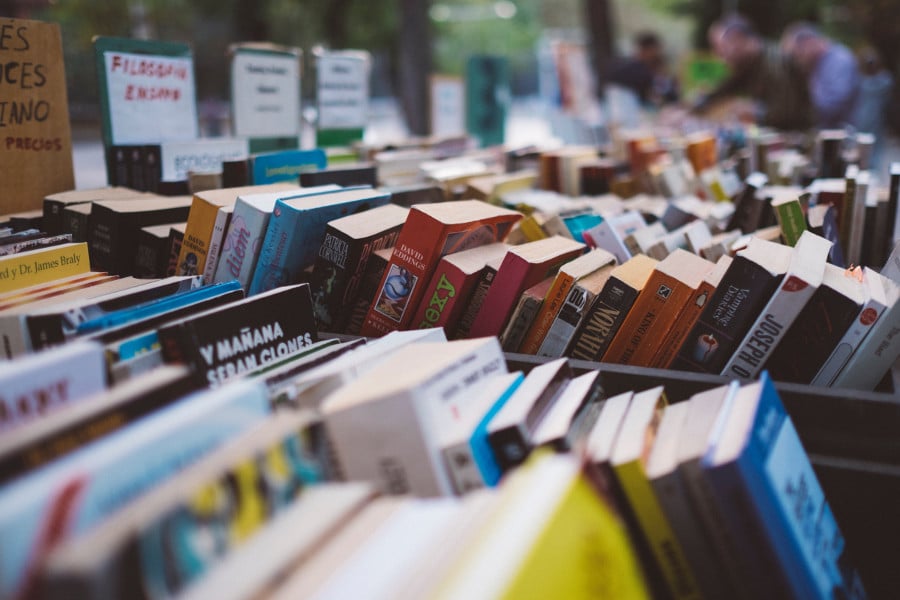 Before you leave the Theodore Roosevelt National Park, you should brush up on some of the culture and history surrounding the area.

You can find tons of information at the Western Edge bookstore! It'll be an awesome learning experience (and I promise it's not as boring as it may sound).

Planning Your Trip to Medora

Now you know of 11 awesome things to do in Theodore Roosevely National Park. Next up, we wanted to dive a bit deeper into when to go, where to stay, and more!

Best Time of the Year to Visit Medora

According to the NOAA (National Ocean and Atmospheric Administration), the best times to visit Medora is anytime between late May to September.

It's good to keep in mind that August is the busiest time of the year in Medora. Surprisingly, June isn't an incredibly busy month and I'd highly recommend going anytime from June to mid-July to get the most out of your trip.

Where to Stay In Theodore Roosevelt National Park

There may not be lodging in Theodore Roosevelt National Park but there are places you can stay just south of the park in Medora.

This western-themed motel is two short miles from the Burning Hills Amphitheater and walk-ins are welcome!

With kitchenettes, free WiFi, complimentary breakfast, and daily housekeeping, the Mountain View Hotel has it all! Not to mention, the staff makes fresh baked cookies daily to give to their guests (a huge score in my book).

If you're interested in camping, the Maah Daah Hey Trail is for you! There are 10 campgrounds available (most with RV hookups) and the views are breathtaking.

Sully Creek State Park is another great place to stay (if you want to camp, that is). You'll also be able to canoe while you're there!

If you plan on going into Theodore Roosevelt National Park with an RV, I highly suggest staying at the Cottonwood Campground.

There aren't any RV hookups, but the views around this campground are gorgeous.

Don't own an RV? You can rent one!

Click the button below to rent an RV from Outdoorsy and get $50 off your first rental! 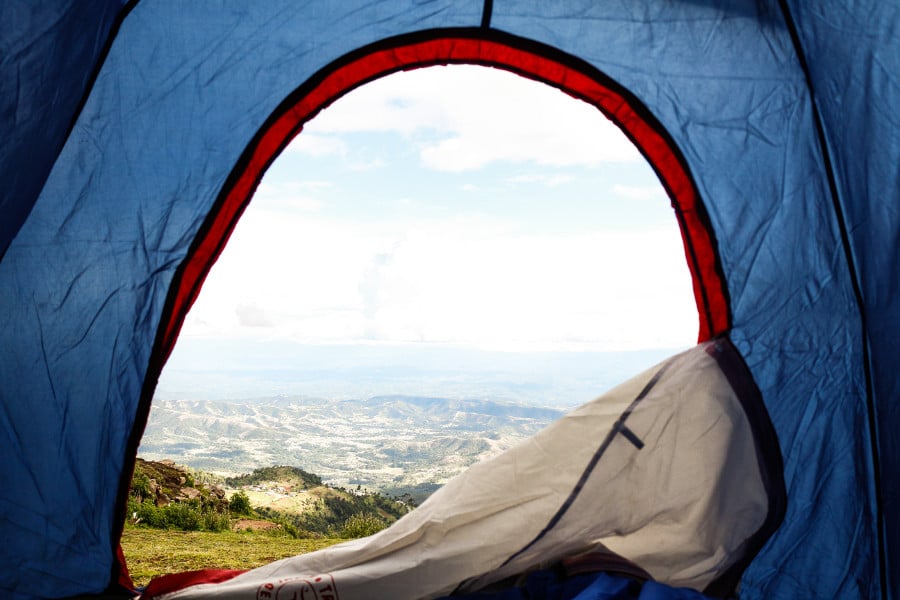 We're almost to the end!

Let's go over a few camping tips before we wrap this up though!

Printable Map of the Park

Want to skip the visitors center altogether? Print out this map before you go!

Or, print this one to mark down where you want to go so you don't have to draw all over the maps you buy from the visitors center 🙂 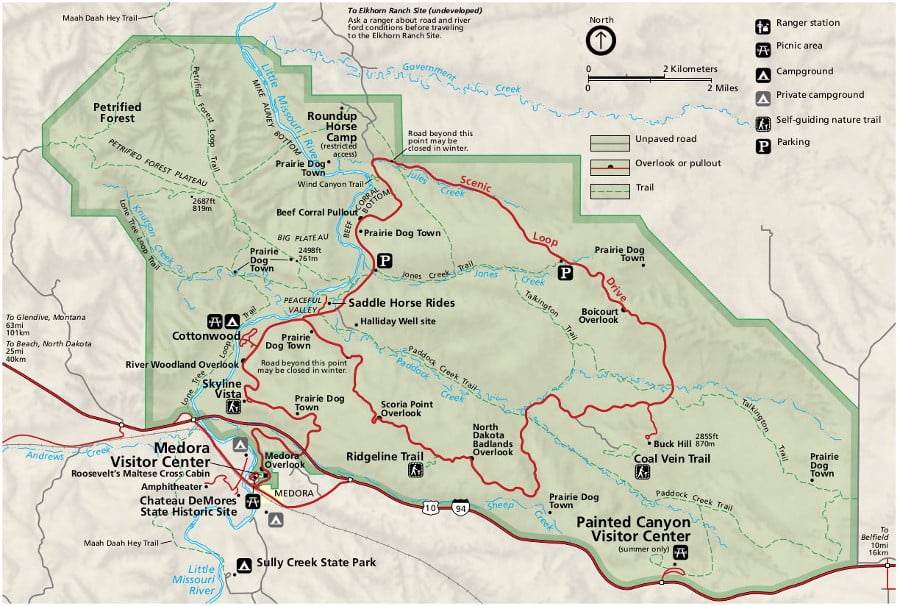 We hope you have the best time in Theodore Roosevelt National Park!

Have you been there already? What was your favorite thing to do? Leave us a comment below and, as always, happy camping!